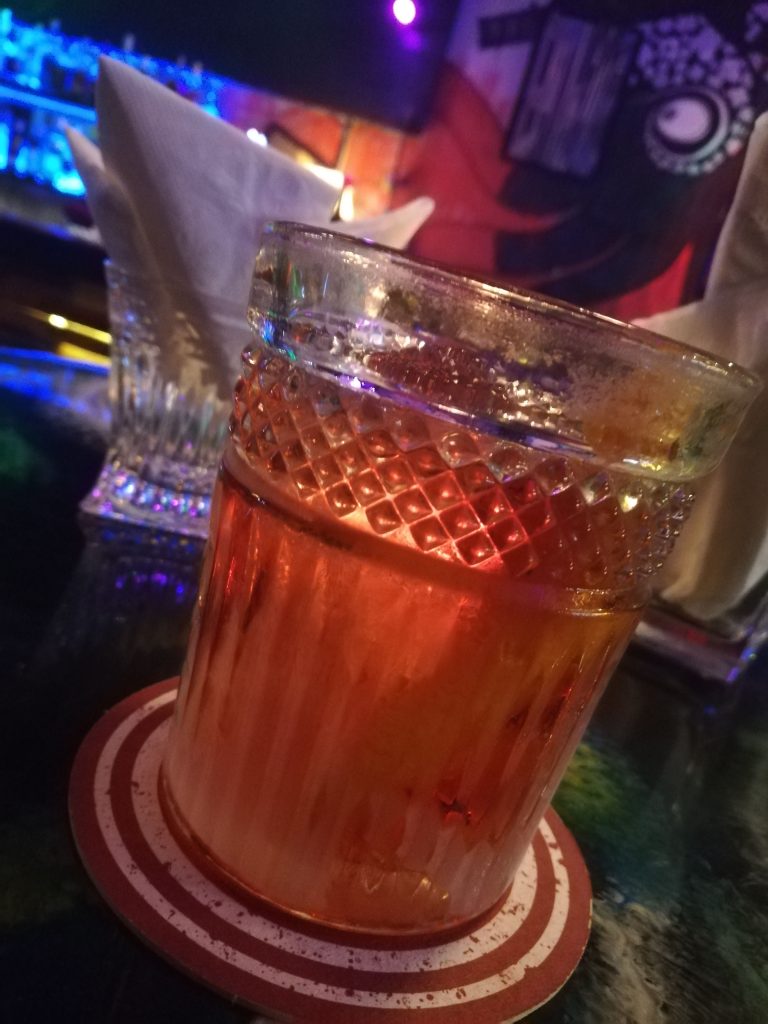 Negronis aren't just a drink, they're a bloody good drink...

According to Campari Australia, those who drink Negronis regularly are witty, well-travelled, well-read and willing to spend big on a good meal. That sums me up proper. When I arrived in Danang in January 2020, one of the first searches I did was where can a man find a bar that will serve this witty well-read lunatic a Negroni? Turns out there’s a lot, well there were lots and lots, of places, particularly in the My An ward wear I lived. So, as a functioning smash hound who loves Negronis, I present to you a run down of the establishments I have hit up during my Negroni chasing adventures in Danang. 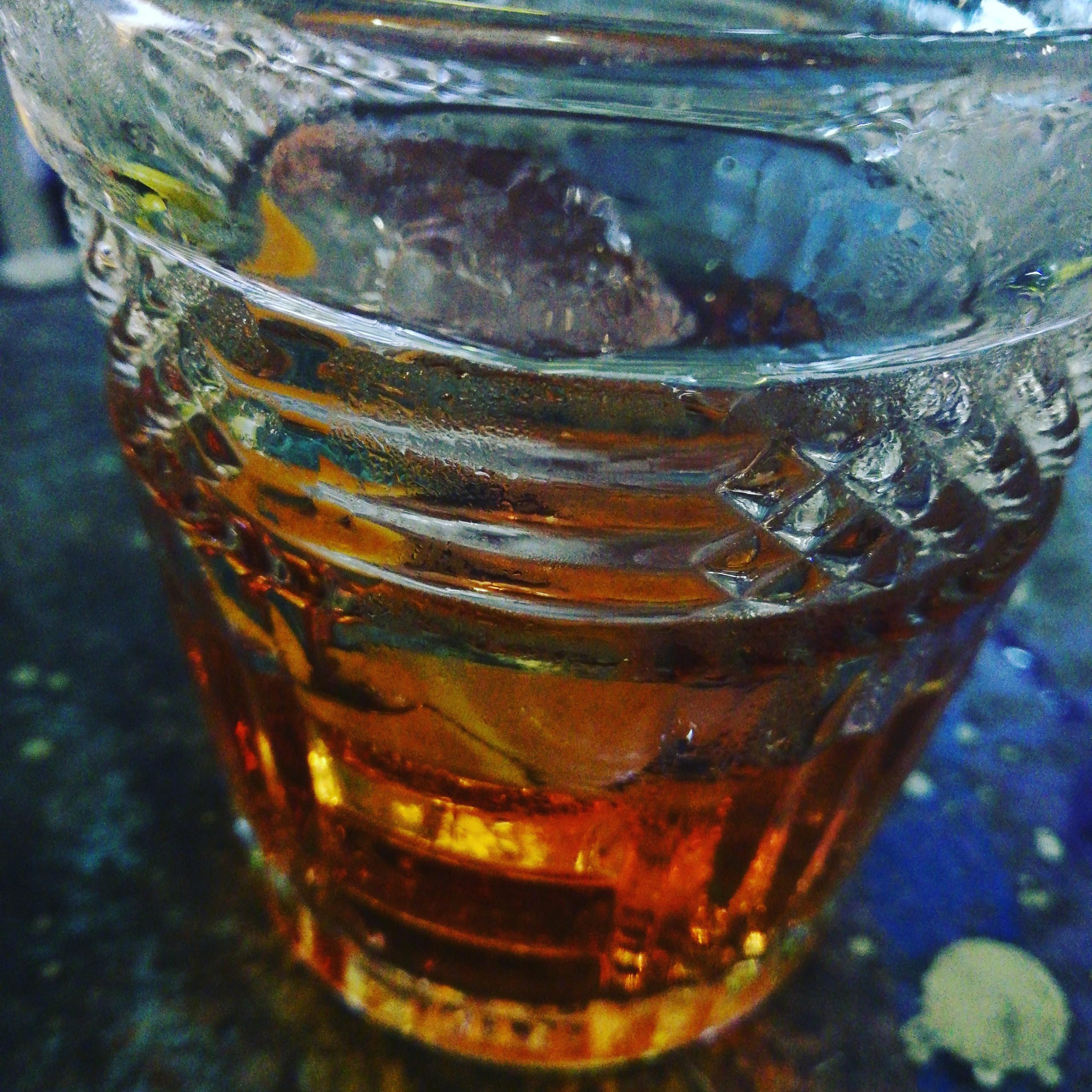 The first Negroni I had in Danang was at a bar called Wanderlust (it soon died just after the second lock down in March). They use to Negroni Tuesdays where they were supposed to be 60,000! Unfortunately they seemed to forget about this rule when I turned up, and charged me 95,000. What a liberty. Shortly after this event I wish to forget I discovered that the famous Oasis Bar in My An served Negronis for 85,000, which is a very handsome price for a tight-fisted, I mean, bargain hunting gent like myself. The Negronis here were the fucking bomb. Mixed correctly with care, the attention to detail from the mixing technique to the ice cube to the fine print of orange peel were all first rate. Not only was it done with god-damn respect, the measures thrown into this saucy red fox were beyond generous.

The head bartender there was a quietly spoken psychopath, not because he strangled cats and posted severed fingers to the local authority building, but because he loved making big and strong drinks to fuck you up. I would always have three here, that was the standard, any more than three and you would be resembling My Khe beach on a blowy day: proper wavy. This is how you do it, this is how you satisfy a discerning punter like me and keep me coming back for more like a crackhead on sample day. This was a business model that should be shouted about by every business mogul online. Gary Vee should be doing daily Instagram videos declaring: “Oasis Tapas Bar Negronis are the fucking standard, raise your fucking game…” or something like that. You may realise that I have referred to Oasis in the past-tense, and that is because, like Wanderlust, it is no more. Oasis was an institution, it was one of the very first foreign owned bars in the My An area and had been doing great business for a decade. But 2020 has had no respect for anything, and around July time Oasis closed it’s doors for the last time. A fucking disgrace, can any other bar in the area meet it’s solid standard of smash???

Soul Kitchen in An Bang is a nice location right on the beach. A little overpriced, as these beach front joints tend to be, it is a relaxing spot, to extent! You will find yourself being pleasantly harassed by beach vendors flogging all sorts of wares and quails eggs. They smile a lot and are very friendly, but they do have similar traits to that of a small town night club sex pest. No does mean no to them. This is why many a man has developed the cold blank face stare. I use to think people were proper rude and entitled pricks based on the frequent use of the cold blank face, just staring into space dismissively like some Uber honky with a hookers elbow jammed up their Harris. However, as I have learned, these arseholes are wise arseholes, because if you have no intention of buying stuff you don't need not want, being smiley and engaging is just leading people on, and that's very mean.

On my previous two visits to Soul Kitchen I had not realised that they sold Negronis and I happened to find myself here on the random and was pleasantly surprised to see my mistress on the menu. At 120,000 dong it's in the higher price bracket, and basically that means it's 90,000 for the booze and 30,000 for the view. It's a good view, but the music they play in this joint doesn't compliment the sites of lush beach and ocean. It's more for complimenting the stench of trustafarian dreadlock stank and sweaty first world chub folds in a dirt hostel. I suppose those are minor gripes, but then again, being so complacent about these minor gripes is what drives some men to murder.

After consuming a tuna steak that my friend had been singing the praises of for some time and feeling mildly satisfied, it was time to consume a glass of the bosses nectar. I ordered the Negroni whilst my friend remained silent, only for the waitress to walk away and for him to suddenly inform me that these Negroni’s were no good. He said that they did not use Rosso Vermouth but orange juice instead. I was disgusted by this concept and equally disgusted that he did not inform me whilst making the order, but I’m an explorer, and sometimes you might have to experience some most dark and hideous things.

Fast forward a few minutes and she brought the Negroni over, from a distance it looked like a regular Negroni and once it had arrived it did not resemble the Frankenstein monster my friend had predicted. He was surprised by this, I was not, as I am an Englishman abroad and we don’t have any issue with causing offence so this waitress must have known I was not to be played with. What did shock me, and I am still recovering, was that instead of a signature orange peel, there was a whole round slice from what must have been the worlds biggest lime. A slice of lime in a Negroni? Not today satan! But, it was here now and I figured maybe this addition may open up doors to a whole new world of taste sensations yet experienced by a way above average human like myself. Unfortunately this was not to be, the lime did not add anything but it did not take too much away. This was by far the most average Negroni I have ever had, and when something is so difficult to fuck up that is quite an achievement to be honest. It was forgettable, except for the un-welcome presence of lime and the very idea that this could have been made with orange juice. That is unforgettable and unforgivable and lucky for them they narrowly escaped receiving a thoroughly stern dressing down on google maps. 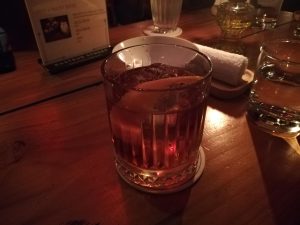 I have only been to this place twice, and both times I only drank one drink, and it wasn't a Woo Woo. This place is where you expect to drink negronis, it's all jazzy, and like Hoxton ten years ago. Yes, it's a wanker hole. Let me clarify, I have no problem with countless jazz inspired speak easy cocktail joints, but if you don't admit to it's wankery and have the self awareness that you are committing an act of wankery by drinking there, then you need to call mumsy for a good drawing down. Noone likes moderate jazz, not even the musicians, it's just a lie we all partake in.
The level of wankery was at record breaking levels on this evening. Not only was I served a small complimentary bowl of salted popcorn, once a very kooky idea in East London toss holes, but I also received an auditory assault from the live jazz ensemble. Yes, ensemble, I will use this kind of talk when describing such experiences. You may have heard of scat singing, you may have seen it movie parody form, but to experience live in reality is something else. For two seconds I thought it was just Vietnamese, until the haunting reality kicked me in the Harris, this was scat talk. Surely this was some kind of, I dunno, prank or something bro. Buy it wasn't, and people were nodding and clapping with acceptance. I just couldn't accept this. And worse of all some boys were videoing and photographing this for what had to be promotional purposes, and I was caught on camera several times. I'm immortalised in wankery now. I hate technology.
But hey, the negroni though, that's why I subjected myself to such things. It was small in portions, but they had a very impressive trick to manipulate your expectations by plonking an ice cube inside the glass with a vast circumference. This made the whole glass look full to the brim with booze, when in reality, it was a quarter full of fight juice. Nice trick pal, but next time, give a man more bang.

Opposite where Wanderlust once was, is a curious place that has deck chairs and sometimes plays Charleston infused house. Sounds terrible I know, but it's not so bad. On occasions I would have a massage and enjoy the relaxing aftermath sat on one of those deckchairs, drinking a cocktail whilst waiting for the sun to go away. This place does get busy, but I've never attended, unlike the craftsman, on a busy night. And nor would I want to, people are terrible, worse than hamsters. The negronis here are decent enough, priced at 100k, it's far superior to crazy cats lunatic offering. As far as quality goes, it's as good as one as one I would make myself, but it does come in a nice glass, the ice is a good size, and the booze content is agreeable. Jesus, what kind of ponsed up psychopath am I. 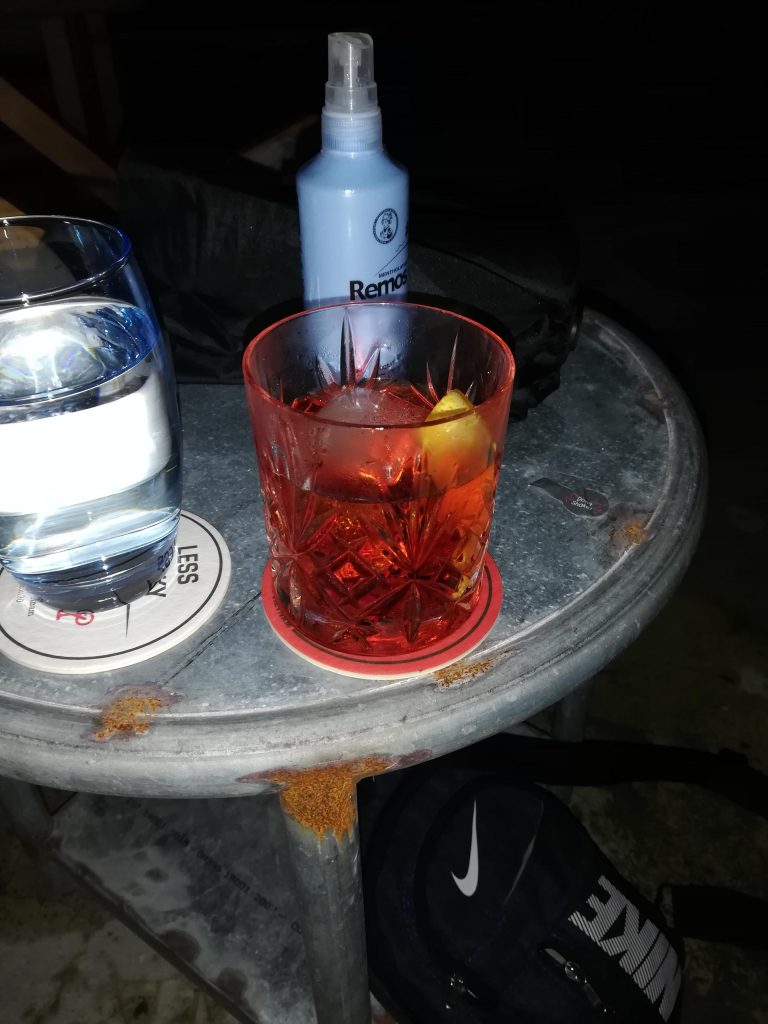 First time I came to the Apocalypse Now bar was when I first came to Danang. I understood the drill, it's a poncy beach bar with inflated prices, but I wanted the Mrs to at least have some boasting points on Instagram and this is the kind of place that would impress the easily impressed. It has the usual superficial charm that a middle aged tourist might think is mad hip. Loud obnoxious generic house music and cocktails in nice glasses, plus some live music interpretations of 70's pedophile rock. When I came I had no idea they sold Negronis and was on a budget at the time, but as soon as the sweet baller mistress was in view I had to succumb to her seductive calling. At that time it was pretty pricey, but upon my recent return the prices have well and truly been pumped up.more than a body steroids heads ball bag. I was almost so disgusted by the price I was close to causing a late scene before writing a very stern letter, but I refrained. The cocktail itself is adequate, but the price can blow a camper van of drag queens. If they took a moment to turn off their offensive plodding euro plop house music and let a man listen to the beauty of the ocean I might not be so critical, but they didn't and I will show no chill. This one can be given a miss and you will never regret that decision unless you intend to get knocked up by a 60 year old used car salesman.

Note: I do believe Apocalypse Bar is no more, it has not been open for a month or so now. Perhaps this was due to the storms and it being low season, but it most likely has been victim, like many venues in Danang, to the financial ruin of a post-covid closed border.